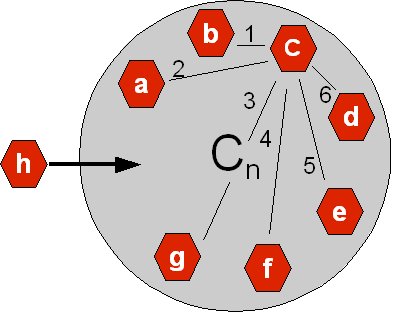 In the above illustration the gray circle symbolizes a network and the red hexagons the nodes (population) of the network. The 6 arcs extending from the C hexagon symbolize C's connections to the other members of the network. There are 7 members. C can make 6 connections amongst the network's population - and so can all the others, though we have refrained from drawing their arcs as well.
Though in most situations the value of these connections would vary – for the sake of this example we will say that they all have an equal value of 1, and thus, the network benefit for C is 6, just as it is for each of the other nodes in the population. The sum value for the entire network is 42 (7x6).
If node h enters the network, the benefit for each of the existing members will be increased by by one, and the sum benefit for them all would now be 49, but we must also factor in the benefit for the new member h, which is also 7, making the sum benefit for all members = 56.
Now according to Metcalfe's law the increase in benefit, when expanding from 7 members to 8 - that is from a benefit sum of 42 to a benefit sum of 56, should be proportional to the increase in the square of the number of members, that is from 72 = 49 to 82 = 64.
Since 49/64 and 42/56 are equal, so far Metcalfe would seem to be right.
But how did we arrive at the benefit value for each member? Apparently, in a completely arbitrary fashion. We made two naïve assumptions: one) that a connection was always a benefit, and two) that all connection benefits were of equal value.

In real life, in any of the myriad networks we participate in, we would hardly value each node, or connection, as being of equal value and, for that matter, often consider some of our connections without value whatsoever -a nuisance.

Diminishing Returns
We work in order to gain something. Rational behaviour dictates that we will attempt to gain as much as possible while exerting as little effort as possible. In all endeavor there appears to be a dynamic relationship between effort and gain. That is - the ratio between the time and energy we spend and the benefits derived is never a constant.
You can only polish a window so much before your work will seem superfluous. The glass will probably look just fine after a few wipes, even though it won't be perfect. You can keep scrubbing away after those last little flecks of dirt for quite some time, but the returns of your work (to the average observer at least) will be increasingly insignificant the longer you continue, and the time and effort you put in will be time and effort you could perhaps be spending better somewhere else - on other windows for example.

Note: Since I cover the subjects of bounded rationality and emotional gratification in other chapters, I wont go into them here - but, yes, it is possible that the rewards for our window washer are not so simply measured as in the opinion of "the average observer".

Another naive example is mining: We discover some gold and we start to dig. Our effort is digging - our reward is gold. As our excavation progresses we will hope to find a pattern in the amount of gold harvested relative to our effort. We are looking for a vein, a core. We are aware that gold is not distributed equally about the surface of the earth.

We might have been lucky and found the vein straight off, or we might need to explore a bit more, digging here and there in some orderly fashion that will increase our chances of finding the concentration we are looking for. Once the core is found we will continue digging outwards from it. Eventually we will reach a point where it is futile to dig further.

The point is, having knowledge about the distribution of gold deposits, digging for gold just anywhere is not rational behavior while digging where one knows there is a concentration of profitably harvestable gold is. As the amount of gold found becomes increasingly sparse in proportion to the amount of digging required we will begin to doubt the rationality of carrying on in the same direction.

We realize that somewhere in between lots-of-gold and no-gold-at-all there is a breaking point where the cost of effort has surpassed the returns on effort. Unfortunately mineral deposits like wins in a poker game, and many other potential gains, do not present themselves in a linear fashion. We are often driven far past the break-even point in the hope of getting lucky - finding a new vein. And sometimes we do.

Though technology does not eliminate the dynamic relationship twixt effort and gain, it does move the breaking point so that the benefit curve remains above the effort curve further out from the profitable core. And this gives rise to the argument that many natural resources are not as limited as we reckon them to be since technology will make costly exploration and extraction methods cheaper (move the breaking point between cost and benefit outwards).

Soft IT, due to its commonalized-commoditized nature, pushes the cost-benefit breaking point to extremities unparalleled in the physical world, and tends to straighten out the non-linear or erratic nature of exploration.
- posted by Greg FitzPatrick click for separate chapter layout 0 comments